Music was made to be played
https://forums.playgroundsessions.com/

by Frank
No one can like a computer playing the piano.
It would be nice if there were a Tolleranz-Regulator . 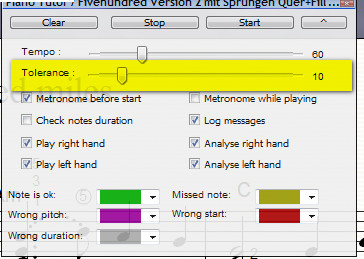 by dawson1331
I don't understand how the accuracy is measured. Why is the accuracy only 52% in the attached image? It seems like it should be higher? What do I need to do to improve on this?

by davidsides
It appears that for a portion of your notes, you played the pitch correctly, but the timing, or rhythm, was a bit off (which is why there are some pink dots on the screen). Try playing it at a slow tempo until you can land all greens, then slowly speed it up with our granular tempo tool.

by dawson1331
I have studied this problem a little more and discovered that my timing is more than accurate. The problem is that I have a keyboard that can layer sounds, so I was sending the note on 2 midi channels at the same time which caused confusion with the software. As soon as I set the keyboard to play just one layer (channel) everything was OK and all notes came up green. User error! Sorry.

by seant23
Thanks for the details Dawson, I'm sure they will help someone else out in the future. Lots of different audio setups out there!

Frank wrote:No one can like a computer playing the piano.
It would be nice if there were a Tolleranz-Regulator .
tolleranz.jpg

I couldn't agree with you more! We'll be upgrading our playback in the near future to try to make it sound more like a real person.

by doubleaught
Brand new to Playground, I had the same issue where I was getting low accuracy marks on every note despite striking them appropriately. I fiddled with the settings on my keyboard to no avail.

Then I tried replacing the factory-issue MIDI cable with an aftermarket model of more recent vintage (iConnectivty Mio). The latency problem disappeared immediately and now I'm registering near 100% accuracy on all my pieces.

by Sandhya60
I agree, the picture of the score with the dots off by .oooooooooooooooo1 of a second should be given a higher score, in real life you wouldnt see this. The programmers need to make this less of a video game of wacka mole or bag toss and get to reality. Who can progress if you are battling one line of music and keep getting red dots even though you are on the mark.

by sw1tch73ch
I see that the picture has notes that are green and have an overlay of pink. That means the piano sent two notes at the same time. Two voice layering was turned on. Sandy, does your end result show the same thing? A green note with a pink over top? That might be you keyboard sending two notes together, for instance one for piano and one for strings.

I remember playing with the sounds on my keyboard, layering another voice and getting exactly the results as in the picture dawson posted. I had to turn off the layer for the second voice, even though it sounded really nice with the extra layer.

by sw1tch73ch
I can't get the forum software to keep two images in the message, so I'll post this twice, sort of. One with Dual Layers off and nice green notes showing, and a second post in reply with the Dual Layers on showing green notes with pink ones all over the place. Dual Layers might also be called Dual Voice.

First picture with Dual Voice off: