Geek out about your keyboard, MIDI controller and any other equipment you're using with Playground!
Post Reply
9 posts • Page 1 of 1

Hello,
It's possibile to use a custom VST on PGS instead the built in?
I want to play with more enjoyable piano sound.
I found on techincal support section in the forum, a topic from 2015, where PGS support was saying that feature was planned for implementation.
Five years are passed but i cannot see it anywhere, i miss something?

If it's not implemented yet

, there is any workaround method to accomplish this missing feature? (in windows PC)

I have luck, I have a piano, where the USB is working both ways (instead of "USB to HOST" Yamaha calls this "USB Audio Interface"). This means, that I connect the piano with USB to my laptop, and one way (Piano -> PC) it sends the MIDI keystrokes, and the other way (PC -> Piano) it sends all the audio, as if the piano would be a speaker. Onto the PC audio, the Piano itself is played as an overlay.

What I do with this setup: I just mute the piano track in PGS, and listen to the audio via the piano itself.
Top

I ussually exercise with my headphone.
I have a Roland FP10, connecting with USB does not disactivate the keyboard speaker, but i usually mute it.
Top

I also practice very often with headphones, which in my case are connected to the piano, not the PC.
Top

FlatPanda wrote: ↑
Sat May 02, 2020 7:25 am
I also practice very often with headphones, which in my case are connected to the piano, not the PC.

But with headpones in your piano you lose functionalities like metronome and backtrack, right?
Top 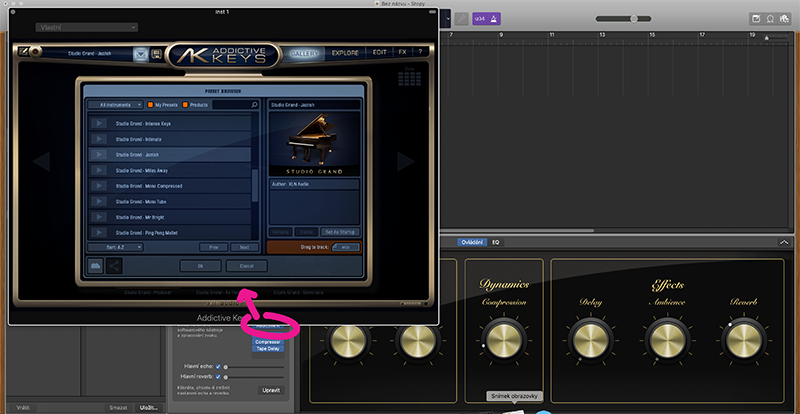 MarcoB wrote: ↑
Mon May 04, 2020 2:13 pm
But with headpones in your piano you lose functionalities like metronome and backtrack, right?

No, because, as mentioned, my piano acts as an external speaker. I just mute the piano track in PGS, I leave the accompaiments and metronome.
Top

On Windows the process is a little hard thanks to quirks that keep multiple pieces of software from accessing the same midi device at the same time. However, I was able to get it to work using Tobias Erichsen's loopMidi software and FL Studio which is free (but has some limitations for free users, such as not being able to save files). If you have a standalone VST that can send MIDI out then just send that to a loopMidi channel and set PGS to take that as the keyboard instead.
Since this is a confusing and painful process I've also made a recording: https://www.youtube.com/watch?v=zeVAR5-7slM

Congrats, now you can tab back into PGS and enjoy yourself until it inevitably crashes. If it doesn't work, then at some point you probably caused a port conflict that made PGS freak out and lose the MIDI controller. It's also probably going to default to your keyboard and crash on load whenever any other application on the PC is using it. This is why setting the input to the loopMidi port was the second step and not later.

And for the record, I tried using the patcher plugin to duplicate the midi channel into two MIDI Out plugins set to different ports, but you have to feed them back into the system they'll get forced into the same MIDI port regardless of the setting in MIDI Out. I'm not sure if there's a workaround for this.

If this looks like a massive problem filled PITA that's because it is. I tried finding software to duplicate the MIDI device and circumvent the conflicts, but one option was paid and the other one was some french software called MIDI Relink that I couldn't figure out how to use. I R SMRT. 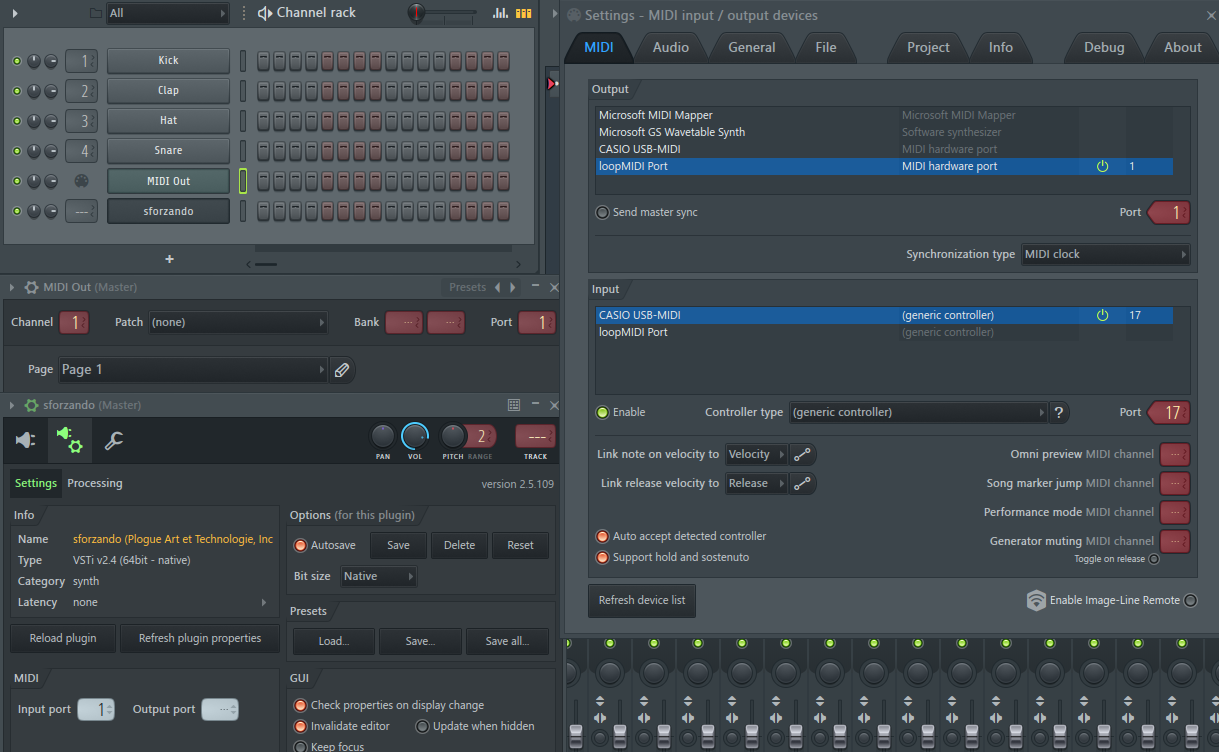 I approached my set up a little differently.

Firstly, thanks to the PGS team for providing me with the chance of learning piano. The PGS app has helped enormously with progress.

Each time I make progress I invest a little more in my set up with new equipment and software. The most recent progress meant I felt I could invest in a more advanced or realistic piano voice. I decided to opt for the Garritan CFX Lite VST for the moment. However in years to come, if my progress keeps moving forward, I hope to add a Steinway D VST from some developer to my set up.

Anyway, I was interested how various PGS users configured their set ups to make using a 3rd party VST work with the PGS app. Here is my solution, based on my set up . . .

I use a Yamaha MOXF8 for my "piano". It's OK but the piano voice model in it is a little bland. So I installed Garritan CFX Lite onto my Windows 10 SSD. After doing this I was really blown away how great and authentic the Garritan VST sounded, even without trying to fine tune all the parameters of it!

However, when I came to run PGS and using the Garritan VST, I noted I could not hear the PGS Count in or accompaniments etc. The midi control (via the MOXF8 USB port) operated the PGS app fine as far a key triggering goes.

I finally settled on a method to run the Garritan VST audio and PGS audio simultaneously from my PC installation without the need to invest in an expensive separate USB Audio Interface - though I plan to get one when more progress is made! My PC and my MOXF8 are in two separate rooms. All I do is connect the two together is a 5 metre HDMI lead and a 5 metre USB cable. I control the PC remotely when I'm in the music room corner with a small wireless keyboard. This sends a signal to a dongle sat next to my MOXF8 and then runs on another 5m USB extention cable to my PC in the other room.

In PGS I set the Output Device to "Line (Yamaha MOXF8)".

The PGS/VST MIDI control comes from the USB output of the MOXF8 and is set with the usual "lower key then upper key" calibration tool in the PGS app.

All this means is that I use just the USB cable from my MOXF8 to my PC to route the VST/PGS Midi control and audio data back up the same cable into the A/D section in my MOXF8. Then I run the L+R Phono Out connection from the MOXF8 to my external cheap and cheerful £40 (and surprisingly good sound) Blaupunkt TV-like sound bar (used as the speaker for my piano learning area). The 90cm long sound bar fits just perfectly across the bottom length of my MOXF8 and is convenient to attach to the beefy keyboard stand which the MOXF8 is mounted on. I painted a large sheet of MDF board black and then installed it at the back of the stand to block off the underside of the music area which makes it a self contained installation. It looks factory made but it is purely a random outcome when the pieces just happen to come together so neatly.

With the A/D converter in my MOXF8 I can adjust the sound level and various dynamics of the audio. I haven't adjusted anything yet because even on the default settings, the quality of the Garritan VST is so mind blowing, so I 'm happy to carry on for the moment.

I tried to post images to this message, which illustrate my set up approach but for some reason the message window won't allow them . . .

I can highly recommend using a 3rd Party VST running alongside PGS. The authenticity of a piano VST is incredible. I feel a whole new level of immersion in my learning and its really added a new sense of fulfilment when using PGS to make further progress.

Although the VST is a detailed sampled model of an actual Yamaha CFX Grand Piano costing £150,000, my Garritan VST cost me just £80 but I feel like I'm playing the full acoustic £150,000 version - WOW!!

All the best to everyone on their learning journey with PGS.

Return to “Your Playground Sessions Set Up”